Butterflies and Bees on a Sunny Day

This article is republished from SutroForest.org with permission.

One of the lovely things about Mount Sutro Forest is its changing moods. We posted pictures here of a foggy day recently, when the forest was ethereal and damp. But the previous afternoon, it was sunny in the forest. A perfect day for butterflies and bees.

We’ve seen bees working the blackberry bushes in the forest before, but this time they were so intent on their food gathering they let us get close and get photographs.

So here it is, busy as a bee… of course. 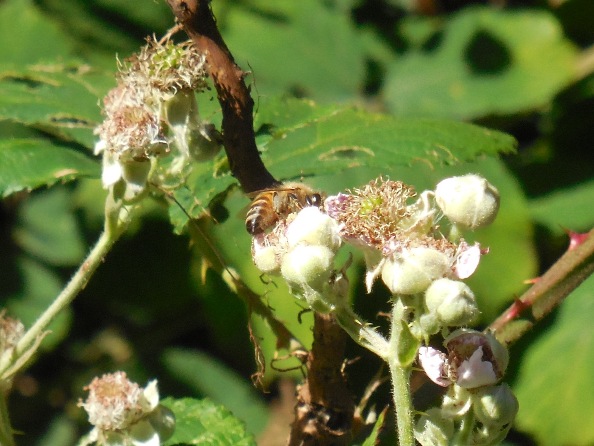 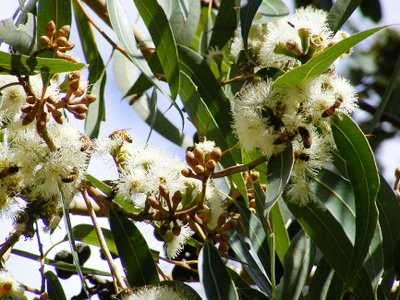 Our trees are so tall that we haven’t yet succeeded in getting the photograph, but other photographers have.

In fact, someone recently sent us a link to the Israeli paper Haaretz, which report that in Israel, bee-keepers were able to save eucalyptus trees slated for removal. There, too, eucalyptus is a crucial source of sustenance for bees.

AND THEN THERE WERE BUTTERFLIES

We were delighted to find quite a few gorgeous Anise Swallowtail butterflies – half a dozen or so. That’s unusual for Sutro Forest. This butterfly lays its eggs on fennel, which is unfortunately one of the plants the Natural Areas Program targets with its toxic pesticides. 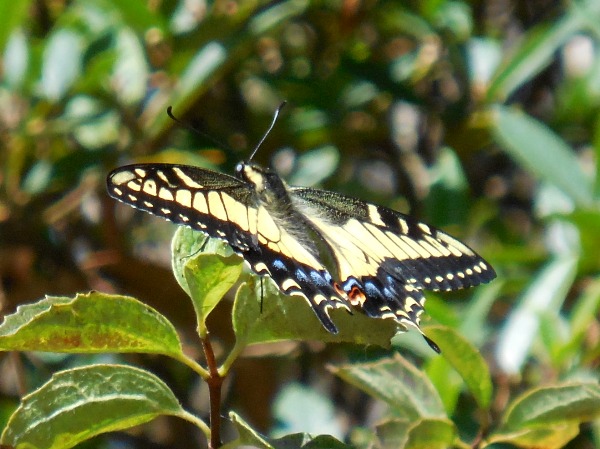 On Mount Sutro – at least, UCSF’s portion of it – no pesticides are in use, but there’s no fennel either. These butterflies will have to hunt for other places to breed.

Then we saw something we had never seen before. In a sunny patch, two Anise Swallowtails were flitting around. Eventually, one stayed and the other left. An Umber Skipper, a little brown butterfly maybe a quarter of its size, started chasing the remaining of the Anise Swallowtail. It looked like a blackbird harassing a hawk, using its superior maneuverability. Eventually both of them settled on a twig, and we got this picture.

What was happening, we wondered? We asked Professor Art Shapiro of UC Davis, an expert on California butterflies. Here’s what he said:

“In riparian habitat, both species use sunflecks as sexual rendezvous sites. (Anise Swallowtails also use hilltops in hilly terrain. Umbers don’t.) Males and mateable females (generally virgins) are genetically programmed to find such places–butterfly “singles bars.” Both of these critters are males. Presumably the presence of the swallowtail in the same fleck might have deterred a female Umber from approaching; or perhaps it was a purely mechanical response to movement nearby; in any case it was almost certainly a direct or indirect example of interference competition for a limited resource–a sunfleck. Great picture!”

Who knew butterflies did that? They seem so pretty and so mindless – but like all other creatures, they’re busy trying to survive and reproduce. Umber skippers breed on grass, including Bermuda grass. So if this one succeeds in finding a mate, they should be all set.

“We saw a bobcat today in Mt. Sutro by the Aldea Center,” commented reader RM on MntSutro.com on 10 May 2012. We were fascinated.

[ETA: A naturalist who studied the picture thinks it’s probably a very large feral cat, because a bobcat would have a black tip to its tail and ears, and likely have visible ear-tufts.]

Bobcats aren’t uncommon in wilderness areas around the Bay, and Tom Stienstra, one of our favorite journalists, wrote about them in the SF Chronicle’s blog recently. (Click HERE and HERE for links to his stories and pictures.) Someone told us they’d been sighted in Sharp Park in Pacifica. But this was the first we’d heard of one in San Francisco.

Sutro Forest is amazing. Great horned owls. Coyotes. Forty kinds of birds. We are so fortunate to have this little piece of naturalized forest in the heart of San Francisco, and the wildlife habitat it provides.

[Edited to Add, June 2012: We heard from someone else that they saw a wildcat on Mount Davidson  (which is quite close to Mt Sutro). So perhaps… if you’e wandering these forests, look out for them. They are not tame, and should be given their space like all wildlife, but they are not dangerous to people.]

We’re starting a new website. Barbara French, Associate Vice Chancellor of UCSF, suggested that for the single largest forest remaining in San Francisco, Sutro Forest was not very well-known. We’re hoping to remedy that, and this informational website is a step in that direction.